January 8, 2018 By LCH Communications No comments yet Press 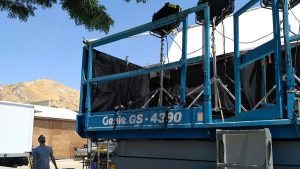 Overture, curtains, lights: This is it for IPS – a bona fide Hollywood closeup – and, oh, what heights they’ll hit.

And the best part is, Intelligent Product Solutions will hit them from ground level, thanks to the Juicer App – an IPS-designed digital tool that allows lighting technicians on motion picture and television sound stages and location shoots to adjust set lighting remotely.

For chief lighting technicians – you may know them by their stage name, “gaffers” – and other film-crew members, the innovation is a winning double feature: Juicer App improves set safety by eliminating the need for gaffers to constantly climb up and down ladders and catwalks, while making it easier than ever for Spielberg et al to capture the perfect light for each shot.

The Hauppauge-based product-design company created the Juicer App in partnership with Los Angeles-based Lighticians Inc., a “smart wireless lighting” startup that has released Version 1.0 of the digital tool in the App Store. The app is already in use on various Hollywood sound stages, including the set of the CBS Network drama “SEAL Team.”

The Juicer App works with another proprietary Lighticians product, the ShineBox, a “WiFi to DMX bridge” that provides wireless connectivity to Digital Multiplex 512 systems – a technical standard for digital communications networks commonly used to control stage lighting and effects.

With most of its chips riding on its flagship app and sister ShineBox, Lighticians reached all the way across the continent to tap IPS as its design partner because of the Hauppauge innovator’s specific expertise – “in particular, its expertise in designing wireless products and mobile software apps,” according to Tim Duff, Lighticians founder and chief executive. Light touch: IPS had the right stuff, according to Lighticians CEO Tim Duff.

As part of the design process, IPS created a color-coded, user-friendly interface that enables gaffers to see the entire network of potential lighting configurations on their mobile-device screen. The product-design company incorporated a proprietary “smart software stack” that integrated the required tools, facilitated the necessary functionality and ensured compatibility with existing devices in a gaffer’s arsenal of gears and gadgets.

For IPS – which has largely specialized in Internet of Things applications and wearable technologies, but has worked on a wide variety of third-party projects – the chance to light up the entertainment realm was exciting, according to CEO Mitch Maiman, but not entirely unique.

The Hauppauge-headquartered company, which maintains satellite offices in Minneapolis and Seattle, has stuck its toes into entertainment’s waters before. Maiman referenced design work for another lighting-focused production company and “innovation-related projects” for the Optimum cable company and MSG Ventures, a subsidiary of the Madison Square Garden Co.

But the Lighticians partnership highlights what Maiman sees as the changing face of the entertainment industries, with a world once dominated by three main television networks and a handful of production studios expanding to include dozens of networks and nearly as many distribution channels, from digital to satellite to cable.

That multitude of producers is starved for content – “They’re not replaying ‘Gunsmoke’ and ‘Leave it to Beaver’ anymore,” Maiman noted – and that creates some major cost concerns.

“So, you have the issue of producing all this high-quality content without exploding your costs,” Maiman said. “And then you have to figure out how to distribute your content, with FiOS, DirecTV, Netflix, all the cable companies, all these unique delivery methods.”

That’s where a company like IPS comes in, he added, as “the technology guys who come up with new ways of doing things.”

“The question is, how can we provide value to [producers]?” Maiman noted. “The idea is to come up with ways to help them create content in more cost-effective ways.”

The company does have other entertainment-related product-design projects in the works, according to Maiman, but they are “forward-looking” and “measured in years.” For now, IPS is excited to make a cameo appearance with the Juicer App –  and Duff, for one, is giving the Hauppauge maker’s performance rave reviews.

“Dynamic lighting is crucial to visual storytelling,” the Lighticians CEO said. “The pace of content creation is faster than ever and exceeds the resources available to productions, placing pressure on gaffers and other lighting creatives to do more with less.

“The Juicer App and ShineBox wireless system allows the gaffer to provide more cost-effective lighting solutions and controls,” Duff added. “IPS had the engineering expertise to integrate the app with complex DMX lighting systems and to develop the ShineBox solution.”